Today’s posts are going to be a bit different…

I want to talk about how life was leading up to my diagnosis..

I was a normal 12 year old going to school making lots of friends and getting straight A’s. First time i noticed when something was really wrong was something that happened in school. I was in science class painting a bottle rocket made from a soda bottle.. I felt weird so i ask to go into the hallway for some fresh air. Next thing i know is i can’t speak and i’m falling with a fuzzy head. All i remember is my science teacher picking me up and running me to the nurse, when i got there they called home and my mom came to pick me up. That same day i went to the doctors and that’s where it all started.. “Shes fine it was probably the heat”. At first i was like okay.. they’re right!

I went to school the next week and i kept getting dizzy and light headed, adding to that i had bad stomach aches. I went to the school nurse and told her how i was feeling.. she sent me back to class. When I got home that day i told my mom what happened, and we were going to keep an eye on it to make sure i’m not getting the flu or anything. The next day i went to the nurse again with the same problem and she refused to call my mom. I went to the bathroom and texted my mom to come pick me up, when she got there I was dizzy had a stomach ache and my face was flushed as red can be. Something wasn’t right..

That’s when the doctors started running test after tests on me to figure out what was happening. They did TONS of blood work and other tests like checking my brain and heart making sure i was okay in that aspect. At the end of my cardiologist appointment they told me i have a prolapsed mitral valve, that scared me but they told me it was okay and that they were going to followup with me every few years.

As time went on more symptoms, more tests, more fear..The doctors said i didn’t have anything. That is when they started telling me rude things.. “it’s all in you’re head” “You’re a hypochondriac” “You just want attention”. As I listened i knew what i was feeling but i was starting to believe what they were saying. I then over time developed severe depression and anxiety, the doctors didn’t believe me only my family did, my mom noticed me isolating myself and talked to me. My family was really supportive and then got me some help…The depression was worse than i thought, I fell deep into a black hole and just kept digging. I had many thoughts.. “Why won’t the doctors believe me?” then i had thoughts like “Why am I still here?” I felt like I was taking up all the doctors time with me being sick so constantly. After some time my depression lessened but was still there.

I finally got sent to a GI doctor His name was Dr. Kuhn, as soon as he came in the room he gave me a feeling that he was going to take good care of me and help us figure this out. He ran tests and we were still stumped but, he didn’t give up on me. As time went on i got my depression a little more under control but i gained ever more symptoms. My bones and joints were constantly popping out by such simple movements like turning my head. I had been to orthopedic doctors and they just told me i needed more exercise.. I was doing physical therapy three times a week for 2 hours. I as time went on i got worse.. and i lost all hope..

I recently in 2015 got referred to another orthopedic doctor because they told me i had scoliosis, at this point it didn’t surprise me. When we got there the checked me over..we noticed stretch marks all over my body like a pregnant women. At that time i was only weighing in at 90lbs and i was 5’2, that stumped us. He then mentioned his wife was a genetics doctor, he referred us to her we waited well over a year for an appointment. When we arrived they bought me in and looked at my charts..ran blood tests to make sure i didn’t have the more severe types. She then went in the hall to talk to the others..when she came in she told me i had Ehlers-Danlos Syndrome Hyper-mobility. My mom and i looked at each other with tears in our eyes..happy tears, because after 7 years i finally got answers and a diagnosis.

Thank you all for reading my post!! I will have many more to come relating with this.. Stay tuned and thank you for all of the support! If you ever need to talk about you’re battle feel free to message me!

P.S. I want to thank all the people who have supported me through out my troubles and all.. I love you guys! ❤

View all posts by edspaoutreach

♥  Follow me on my journey through life with EDS  ♥ 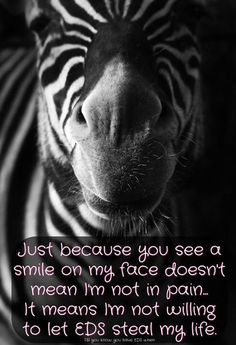